The planet is warming, and many changes are coming that will be highly disruptive at best and catastrophic at worst. For investors, the next 30 years will be a time of increasingly rapid change, just as the past 30 years was, but for a completely different reason.

Austrian economist Joseph Schumpeter described capitalism as a process of “creative destruction” in which technological innovation by new companies drives older firms out of business. Schumpeter believed this to be “the essential fact about capitalism.” Investors have proved him right, financing innovative companies that created enormous shareholder value while simultaneously destroying businesses that failed to compete. Schumpeter developed his economic theories in the 1940s, but it was a half-century later that his concept of creative destruction reached its zenith, with the advent of the digital age.

In 1998, Kodak’s market capitalization was $26 billion and Apple’s was $1 billion. Within 20 years, Kodak was forced to declare bankruptcy and Apple was the most valuable company in the world. Film, the heart of Kodak’s business, was replaced by digital photography and Apple’s iPhone. Technology and the process of creative destruction destroyed one American icon and created another.

But this was not just about one successful company or one sector of the economy. Digital innovations affected every business in nearly every way, dramatically changing the value of financial assets. By 2020, the five most valuable companies in America were in technology. Climate change is unleashing Schumpeter’s creative destruction once again, and as with the digital revolution, great wealth will be made, and lost, in this process.

Predicting the growth of climate solutions such as renewable energy and electric vehicles is relatively easy. Predicting which companies will dominate those market sectors is much harder, as it was for selecting market winners in the past.

Investors in the 1990s understood that digital technologies would be an increasingly important factor in business, yet it was hard to know which companies to finance. Netscape was the leading internet company in 1996 with nearly 80 percent of the browser market. Five years later, the company was nearly worthless. Google was another company with an internet browser, but with a very different outcome for investors. Every investor wants to believe that they would have avoided Netscape and purchased shares in Google.

The era of climate change will force investors to make similar investment decisions, assessing the risks and opportunities in a rapidly changing environment. The Economist summed it up neatly: “Like the internet, decarbonization will lead to structural change in the global economy. Capital will have to flow towards cleaner technologies. The process will create winners and losers.”

There are many reasons for doubt. The relentless growth in greenhouse gas emissions and the inability of governments to reach a binding international climate agreement to lower emissions despite nearly 30 years of negotiations offer little hope for the future. Humanity is further burdened by a biology that struggles with challenges such as climate change. But all is not lost, as the writer Matthew King makes clear: “It’s important to remember one thing, however. It’s true that no other species has evolved to create such a large-scale problem — but no other species has evolved with such an extraordinary capacity to solve it, either.”

Humans have the solutions to avoid catastrophic climate change, but it is unclear whether humanity will implement those solutions in time. The greatest challenge by far is the inconsistency of government support. This creates uncertainty, delaying investment and losing precious time. The good news is that the emissions curve finally appears to be bending downward because of recent trends that are prompting financial leaders to act, offering the first glimpse of a low-carbon future. Unfortunately, we may not get there in time.

We Are Our Own Worst Enemy

Doubters, on both sides of the climate debate, make the path forward significantly harder. Climate denialists have slowed the implementation of sensible government support for climate solutions by sowing uncertainty and confusion. The denialists are losing influence as the science of climate change becomes more widely understood, and as the physical effects become increasingly apparent, but much time has been lost in the process.

At the other extreme, climate defeatists are ignorant of the advance of climate solutions and the potential for human ingenuity. By resigning themselves to catastrophe, the defeatists remove the desire to address catastrophic climate change until it becomes too late, creating a self-fulfilling outcome. Unfortunately, defeatists are becoming more influential as the climate warms.

The vast range of opinions and debates over climate change is wasting the most precious resource of all: time

Time is tight, but the window has not yet closed for avoiding catastrophic climate change. The momentum that exists in low-carbon technologies, changing social norms, and government support represent a turning point in the global greenhouse gas emissions, putting rescue within reach. Columbia University climate scientist Kate Marvel neatly summed up the situation when she tweeted: “As a climate scientist, I’d like you to know: I don’t have hope. I have something better: certainty. We know exactly what’s causing climate change. We can absolutely 1) avoid the worst and 2) build a better world in the process.”

Without doubt, this process will be slower than it should be due to international rivalries, inadequate coordination among nations, and pushback from businesses losing out in the transition to a low-carbon future. But humanity can avoid catastrophic climate change because it now has the solutions to do so. The delay in reducing emissions will necessitate the aggressive use of costly carbon removal solutions to reach net zero, making the path to a low-carbon future slow and costly rather than quick and cheap. But there is a path forward.

Scientists have discovered the causes of global warming and have made clear what must be done if humanity is to avoid a catastrophe. Engineers have invented climate solutions. Entrepreneurs and business leaders have created commercial applications. Politicians are reacting to changing social norms by providing more government support. Momentum is building for a rapid implementation of climate solutions at scale. The transition to a global low-carbon future has begun, providing investors in the era of climate change with the opportunity and challenge of a lifetime. Investors financed the extraordinarily successful Industrial and Agricultural Revolutions of the past, and now investors have an even more important role: financing the world’s future.

Adapted from Investing in the Era of Climate Change by Bruce Usher, published by Columbia Business School Publishing. ©2022 Bruce Usher. Used by arrangement with the publisher. All rights reserved. 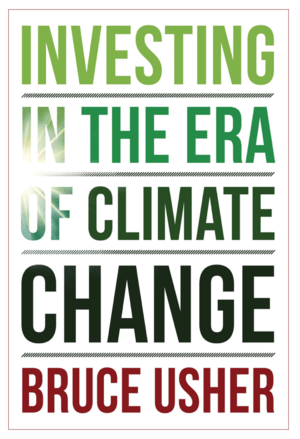 Watch a conversation between Professor Bruce Usher and Financial Times Contributor Sarah Murray on the pros and cons of four climate-friendly investment strategies: